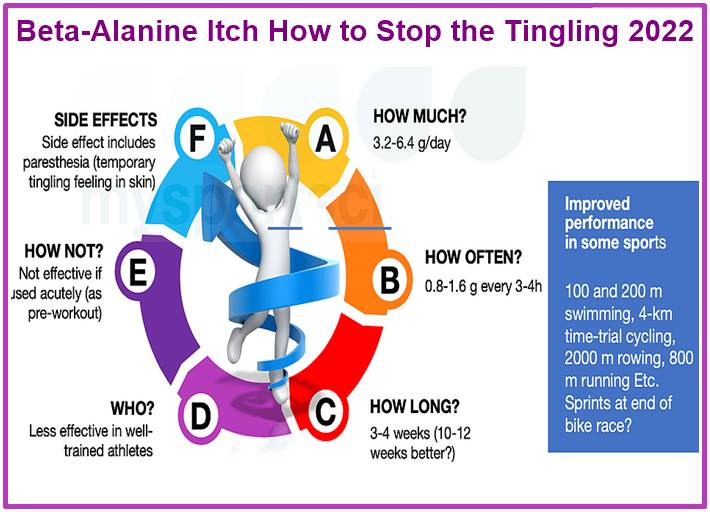 Simply put, ingesting beta-alanine elicits certain neurons responsible for initiating itching and tingling of the skin. This sensation is referred to as paresthesia. This is a common reaction to certain ingredients in pre-workouts and there is no need to be alarmed.

Supplementation with beta-alanine in sport has proven to be effective for what cases and what conditions. Unlike most supplements that are marketed, whose beneficial effects have not been demonstrated, supplementing with beta-alanine could increase athletic performance through an increase in intramuscular carnosine levels, regulating the pH of muscle tissue.

Role of beta-alanine supplementation on muscle carnosine and exercise performance ”

(Artioli GG et al.) It was concluded that beta-alanine supplementation:
– Improves performance in high-intensity exercises of short duration (more than 60 seconds).
– Delays the onset of neuromuscular fatigue.
– It does not have any side effects, except for paresthesia, which is harmless in this case.

In the 2012 meta-analysis “ Effects of β-alanine supplementation on exercise performance: a meta-analysis ” (RM Hobson et al.), The following conclusions were reached:

– An improvement in sports performance is demonstrated in exercises that last between 1 and 4 minutes. In total cumulative doses of 145 – 179 grams. That is why it is recommended to cycle it (rest at a certain point in the consumption protocol). We would be talking about a daily dose of between 4 and 6 grams, approximately, for 1 month.
– There is no evidence that it is effective in exercises of less than 60 seconds.

For more information, I recommend that you watch an explanatory video by David Marchante (Power Explosive):

“Why does my whole body itch when I take beta-alanine?”

Mild paresthesia is one of the most typical and popular sensations when we supplement with beta-alanine. It occurs in most people who supplement. Some people notice a slight tingling, and in others, it is even bothersome. We will see how to try to reduce this feeling.

1.- Where do tingling usually occur based on the experiences of subjects? In general, on the face, but also on the arms, legs, and abdomen. All reviews have concluded that this paresthesia is completely harmless.

2.- What is the mechanism of action? Very possibly, due to the MRGPRD gene (Qin Liu et al, 2012 & Boldyrev et al, 2013), attributed to the mechano-sensation of sensory neurons in the skin. When taking a certain amount of beta-alanine in one dose, it grows significantly at baseline, and paresthesia occurs.

3.- At what amounts does paresthesia usually occur? Studies have concluded that at average doses greater than 800 mg in one dose, paresthesia occurs. (Décombaz J., et al, 2012).
4.- How to solve it? Divide the shot during the day. For example, allow a time trance of 2 – 3 hours each.

Beta-alanine is an amino acid that is converted in the body to muscle carnosine that is crucial to provide strength and resistance to muscles, being one of the reasons why it is recommended; Generally, it is advisable to take 1-2 grams of the supplement before and after meals (4-6 grams daily), because as the number of carnosine increases, performance is greater, as fatigue is delayed.

The supplement is manufactured from animal proteins, especially pork; Now, there is a paradigm about the appearance of a normal itch with beta-alanine, but if this small discomfort is compensated with more repetitions during very intense training, everything can be compensated with the results obtained, including muscle gains without adding weight extra, which really is fabulous.

We know about the benefits of beta-alanine, but athletes who are not very knowledgeable about the supplement feel that tingling or itching when taking it; the sensation is called paresthesia, and it passes because beta-alanine binds to nerve receptors. The sensations on the skin are diverse and although it varies from person to person, it can go from 15-20 minutes to 1 hour in cases of higher doses.

Many bodybuilders claim that, after several weeks of constant intake, this feeling tends to diminish. The practice of adding beta-alanine with food or for example, with a protein shake can be a solution, but when you perceive this sensation, it means that beta-alanine is doing its job.

Nutritional science has worked hard to design new beta-alanine supplements, whose doses are absorbed faster, making the paresthesia effect pass much faster. The explanations, although they are brief, serve to elucidate one of the most popular questions in the world of sports nutrition, when we talk about a normal itch with beta-alanine, which is definitely an interesting supplement to break the plateaus and overcome the limits. Have you felt that itchy sensation when taking beta-alanine?

Why does beta-alanine make you itch?

“Beta-alanine acts at the cellular level to keep the pH within the muscle from getting too acidic, which contributes to fatigue. Therefore, beta-alanine delays neuromuscular fatigue, which gives performance benefits. The itch, or tingle, is just something to put up with on your way to getting those benefits.”

Why do I get itchy when I take pre-workout?

This itchiness or tingling skin is caused by an ingredient called Beta-Alanine. Pre-workout products which feature this ingredient, especially in doses higher than 2g per serve, will most likely cause this sensation. This is due to Beta-Alanine causing acute paresthesia.

Over time, β-alanine can deplete taurine from tissues, including renal tissue, thereby upregulating the synthesis and activity of TauT.

How Long Does Melatonin Last in Your System Dosage 2022

Prebiotic Nutritional Supplements health According to a Dietitian 2022