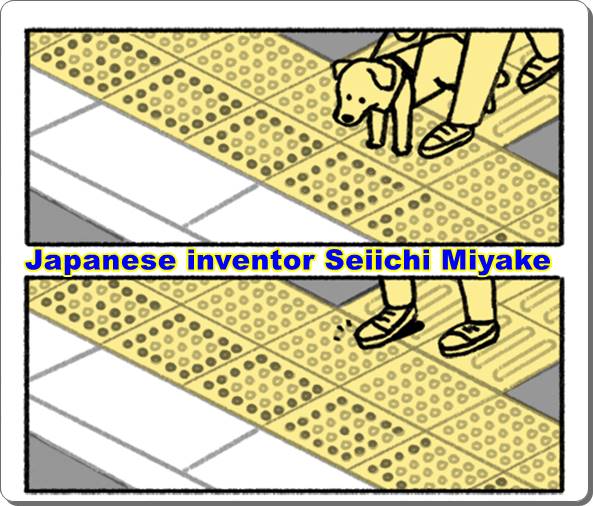 Japanese inventor Seiichi Miyake, whose desire to help a close friend turned into an innovation that drastically improved the way those who are visually impaired navigate public spaces around the globe.

In 1965, Miyake spent his own money to invent tactile blocks (or Tenji blocks as they were originally known) to help a friend whose vision was becoming impaired. The blocks come in two predominant types: one with dots, and the other with bars.

The dotted blocks alert the visually impaired when they are approaching danger, and can often be found at the edges of crosswalks and railway platforms. The barred blocks provide directional cues, letting users know that they are following a safe path.

Aside from identifying tactile tiles via support or white cane, individuals also do so with the help of guide dogs or feeling them through their shoes, as portrayed in other drafts of the Doodle below:

Miyake’s tactile blocks were first introduced on a street near the Okayama School for the Blind in Okayama City, Japan on this day in 1967.

Their use gradually spread before they and sound guides were made mandatory in the Japanese National Railways a decade later. Since then, tactile paving is now used around the world.

Today’s Doodle depicts the Google logo rendered in the style of Miyake’s tactile blocks, embossed against the familiar yellow background.

When Seiichi Miyake found out a close friend was losing the ability to see clearly, he wanted to help. That desire led to an entirely new way for the visually impaired to navigate big cities, railways, and parks.

In 1965, Miyake invented the tactile paving slab (or “Tenji block” in Japan) with his own money. Monday’s Google Doodle celebrates the introduction of the block 52 years ago.

The Tenji blocks were first installed in the Japanese city of Okayama on March 18, 1967, next to a school for the blind, and they would go on to revolutionize the way the visually impaired interact with the world, making it safer and easier to get around public spaces independently.

Miyake’s original design, which was installed in all Japan Railway platforms in the 1970s and rapidly found its way to cities across the globe, featured two tactile patterns that people with visual impairments can detect with a cane or through their feet — providing cues on which way they should head.

One pattern features a series of raised lines that indicate “forward”. The second design is commonly referred to as the “truncated domes” pattern, a series of small bumps that act as a “stop” sign — typically at the edge of a train platform or before a motorway.

A number of different patterns have been designed since, with smaller raised dots or more pill-shaped bumps signifying different directional cues. For instance, when the raised lines are horizontal in the direction of travel, that might mean “look out for steps ahead”.

All of those cues, which many may not even notice as they wander through a city, are incredibly important for those with limited vision.

The latest brightly colorful Google Doodle might make you appreciate what’s beneath your feet for a change.

The latest way Google has enlivened the search page is by giving props to the globally influential Japanese inventor Seiichi Miyake, a man who changed mobility as we know it when he made the world a more accessible place by creating tactile pavement.

The late innovator created the canary yellow so-called “braille blocks,” or Tenji blocks, to line the roads with cleverly designed slabs that benefit people on the street who are blind or have visual impairments.

The idea was simple but genius: let the bumpy street be your guide.

The raised bumps, which you can feel through your shoes or with a walking cane, were a language of their own. The textured design usually maps out as follows: A straight bar helps direct people toward safe zones, while elevated domes warn that there’s treacherous traffic to avoid.

The project was personal for Miyake. It all began when he started working on the design out of pocket to simplify getting around for his friend who was losing his sight back in the ’60s, Google’s Doodle blog tells us.

And to make maneuvering around public spaces better for everybody, the first tactile pavement popped up in 1965 in Japan, and then in 1967 near the Okayama School for the Blind in Okayma City.

Tokyo and Osaka followed suit in subsequent years as Japan really ran with the modification, even going so far as to require that train stations to roll it out on platforms. But it wasn’t until the ’90s that it cracked the U.S., Canada, and the U.K.

Seiichi’s innovation is so ubiquitous today that you might have traversed along with a Miyake innovation today without knowing it. In the U.K. different bright colors can help people who have some sight, like Miyake’s pal. And in Scotland, they use corduroy tactile paving to tell pedestrians of potential dangers or when they’re reaching a ramp.