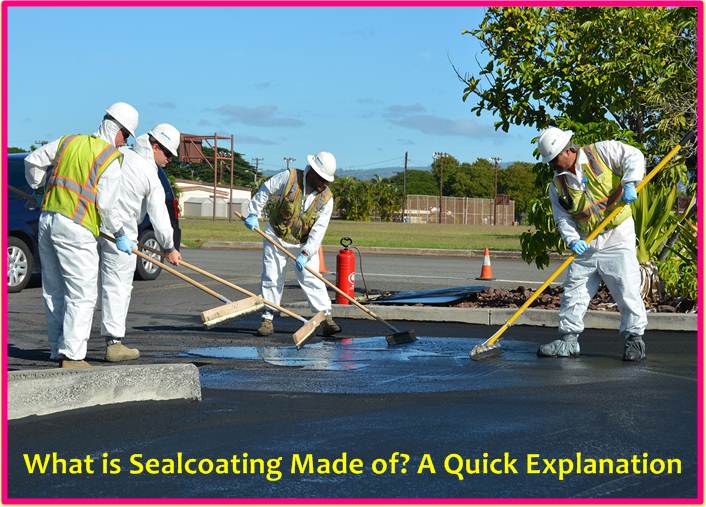 No Comments on What is Sealcoating Made of? A Quick ExplanationPosted in Home Improvement By Randhir SinghPosted on 22/09/202122/09/2021

Regardless of how well-installed your asphalt pavement is, it’s still vulnerable to the elements. That means it is prone to cracking and holes. So, you shouldn’t be surprised if your asphalt starts to fade a few months after installation.

Now, this is where the need for asphalt sealcoating comes in. An asphalt sealcoat is a blend of liquids and other small particles like sand, and it acts as a protective layer to asphalt paved surfaces. Sealcoating helps to protect asphalt from external elements like water, chemical spills, UV rays, and ice, which can damage the surface.

Therefore, sealcoating your asphalt surface reduces the risk of cracks and holes forming on the surface. Besides, sealcoating an asphalt pavement gives it an impressive deep black appearance, while preventing it from becoming slippery.

The main ingredients of sealcoat

The following are the major ingredients used to produce asphalt sealcoating.

A refined coal tar-based asphalt sealer is an emulsion that consists of the following three ingredients:

Both coal tar and asphalt emulsions are sold either in concentrate or ready-to-use forms. The ready-to-use forms come pre-mixed, with water added to create a thick slurry. On the other hand, concentrate forms are mostly used in construction applications and they require the addition of water and other additives to get the final result.

The following are the most common additives used in sealant mix together with their benefits:

The importance of sand in sealcoating

Most people think that sand manufacturers add sand to sealcoating to reduce costs or to add the quantity of sealcoating. However, that’s not the case. According to the sealcoating contractors at ABC Paving, sand plays an essential role in improving the durability of the sealcoat, in addition to enhancing traction to the surface. Besides, sand helps to conceal minor imperfections on the pavement. Typically, manufacturers use high-quality silica sand, which has uniform particles, rather than the normal sand.

What Is a Build Out In Construction Learning the Basics