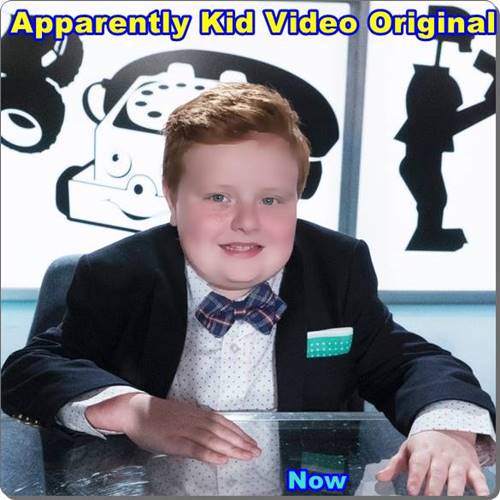 Apparently Kid refers to Noah Ritter, a five-year-old who was interviewed by a local news channel while attending the Wayne County Fair in Pennsylvania. When the interview, which features Ritter animatedly discussing his indifference to the news and repeatedly saying “apparently” was uploaded to YouTube it quickly went viral.

On August 4th, 2014, YouTuber WNEP-TV uploaded a video titled “Apparently” This Kid is Awesome, Steals the Show During Interview.” The video features WNEP-TV reporter Sofia Ojeda asking Ritter how he enjoyed one of the Wayne County Fair’s rides.

Ritter begins to ramble in reply, often punctuating his speech with “apparently” and insisting he had never been on live television. Within 48 hours the video gained over 4.1 million views. On August 5th, 2014, The Laughing Squid published an article titled “Cute Kid Noah Ritter ‘Apparently’ Steals the Show During an Interview at the Wayne County Fair in Pennsylvania.” The same day the video was covered by Uproxx, E!Online, Us Magazine, and Jezebel.

On August 4th, WNEP’s Twitter account tweeted out the interview with Ritter and introduced the hashtag #NoahtheReporter. Within 48 hours the hashtag was tweeted out over 150 times.

Also on August 4th, Twitter user treyschmaltz introduced the hashtag #ApparentlyKid. Within 48 hours the hashtag was tweeted out over 1,000 times.

On August 5th and 6th, Ritter was interviewed by several local and U.S. national news outlets, including WNEP-16, ABC News (shown below, left) and NBC Today, during which he revealed he was embarrassed that he had shared “so much about [his] life” and that he actually did not know the definition, or how to spell the word “apparently.”

The Viral’ Apparently Kid’ video just got a pitch-perfect soundtrack.

Remember the “Apparently Kid” who went viral for repeatedly dropping the word “apparently” during an interview at Wayne County Fair? This inimitable exchange from 2014 now has its soundtrack, and that’s perfect.

Pianist and songwriter Brandon Ethridge scored the interview and posted a split-screen YouTube video titled “The Apparently Kid – the Mini Musical.” It shows the musician playing the ragtime-style piano alongside little Noah Ritter as the kindergarten child offers hilarious comments about his experience at the fair. A smiling Ethridge punctuates his playing to Ritter’s enthusiastic intonations, and it’s a lot of joy.

In case you missed “Apparently Kid” the first time around, Ritter has captured hearts with his liberal use of a word that is apparently generally considered adult language.

When a local reporter asks what Ritter thought of a walk to the fair, he looks straight into the camera. “It was awesome,” he says, “and apparently I’ve never been on live TV before, but apparently sometimes I don’t watch the news because I’m a kid, and apparently grandpa gives me just the remote after we looked at the Powerball. “

Ritter then grabs the journalist’s microphone like a boss and continues talking about the ride he apparently enjoyed. Ritter is a television natural – he then charmed audiences on The Ellen Show – and Ethridge just gave him the perfect musical accompaniment for future audition reels.

Ethridge, based in New York City, has previously accompanied to music footage of the attorney appearing at a Zoom hearing as a cat and Anthony Fauci speaking about the CDC’s mask guidelines. Watch the original Appearly Kid interview that inspired Ethridge’s latest composition below.

During the interview, he explains he is “over” his namesake “apparently.” This news was covered by several websites including Mashable and Mediate. Within 24 hours the video gained over 570,000 views.

On September 12th, the official YouTube channel for Fresh Pet pet food uploaded a commercial featuring Ritter, which he explains is “apparently my first TV commercial.”

The commercial was covered by several websites including Uproxx, The Laughing Squid, and Crushable.

We can’t resist passing along the phenomenon that is Noah Ritter, a young man who’s taking the Internet by storm.

The 5-year-old’s interview at Pennsylvania’s Wayne County Fair is a wonder of stream-of-consciousness, sprinkled heavily with one word: “apparently.”

Cutting a striking figure with his red hair and a green-and-white shirt, Noah quickly takes the microphone from WNEP TV 16’s Sofia Ojeda to deliver a monologue that’s only briefly interrupted by the reporter’s questions.

“I’ve never been on live television before,” Noah says, staring unblinkingly into the camera.

“I don’t watch the news because I’m a kid,” he continues, “and apparently … grandpa just gives me the remote after we watch the Powerball.”

Noah’s delivery — his ability to finish a sentence with relish and certainty, even when he’s discussing how a ride freaked him out — left Ojeda, and many viewers, laughing. When he was done, a round of high-fives ensued.

The initial interview with the boy took place Friday; WNEP did a follow-up with Noah today after his performance drew national interest — including an appearance on Good Morning America.

“Everything’s been overwhelming,” Noah’s grandfather Jack Borowski tells WNEP. “We went to the fair and we got interviewed and everything unraveled from there.”

The station also asks Noah, who lives in Wilkes-Barre, Pa., where he’d learned the word “apparently.”

What Happened To Noah Ritter – The Apparently Kid Now 2021

Noah was first seen from the viral video where he kept saying the word apparently and was just super adorable. After that viral video he was known as the apparently kid.

He later went on the Ellen show and gained even more stardom. But what happened to Noah ritter after his time on Ellen.https://www.youtube.com/embed/fNuWSc6_vrA?feature=oembedApparently Kid

Have you ever wondered what happened to Noah Ritter aka the apparently kid? If you have this is the video for you.

We will be explaining what happened to Noah Ritter and what his future has in store for him.

Currently, Ritter stars on an ABC television show called The Toy Box. On the Toy Box, contestants pitch their ideas for new toys to a panel of industry experts.

However, the catch is that the contestants also have to pitch their toy ideas to a panel of child judges as well.

Ritter is one of the judges that appear on the show, adding his humor and charm to the show. He is still the same loveable little kid that appeared in that viral video and on Ellen several years ago and has not lost any of his humor.

It will be interesting to see where exactly Ritter’s career will go from here. There have been plenty of examples of past child stars that have been able to turn their fame into life long careers.

These are people that have no problem with the spotlight and have a distinct advantage as they have dealt with it all of their lives.

However, there are also several examples of child stars that have flamed out and become irrelevant as time goes on.

When a child star ages, it may be difficult for them to stay in the spotlight. Their niche is their ability to be cute and charming in an innocent manner.

However, as they grow older into their teen and young adult years it can be very difficult to maintain that stardom.

They are no longer that adorable innocent little kid that captured everyone’s hearts. Ritter is of a slightly different breed, as his fame stems from a viral video that he was able to use to catapult his career forward.

Ritter has already adapted from a video star to famous talk show guest to T.V star, meaning that he may fare better than most child stars when it comes to adapting.

However, time will only tell whether Ritter’s career is here to stay or whether he is just a flash in the pan in the era of viral media.

Why is Noah Ritter famous?

By 2016, his viral news interview clip had accumulated over 23 million views.

What Happened To Noah Ritter

Where is Noah Ritter now?

Born in Philadelphia, Noah resides in Pottstown, Pennsylvania, with his mother.

What does the apparently kid say?

That’s right. When the redhead, who came to internet fame for an adorable appearance on a local newscast that involved saying the word apparently approximately 684,760 times, appeared on Ellen Thursday, he told the host that “I got over it now.” His new go-to?

Where is the apparently kid from?

Who interviewed the apparently kid?

Reporter Sofia Ojeda with ABC affiliate WNEP posted her interview with the young boy on the station’s YouTube page. The interview began when Ojeda asked Noah how scared he was while on a ride at the Wayne County Fair in Honesdale, Pennsylvania. Noah then took the microphone and apparently gave quite the interview.

HONESDALE, PA — Noah Ritter is the latest internet celebrity after apparently stealing the spotlight from a TV news reporter.

Reporter Sofia Ojeda with ABC affiliate WNEP posted her interview with the young boy on the station’s YouTube page. The interview began when Ojeda asked Noah how scared he was while on a ride at the Wayne County Fair in Honesdale, Pennsylvania.

HONESDALE, PA — Noah Ritter is the latest internet celebrity after apparently stealing the spotlight from a TV news reporter.

Reporter Sofia Ojeda with ABC affiliate WNEP posted her interview with the young boy on the station’s YouTube page. The interview began when Ojeda asked Noah how scared he was while on a ride at the Wayne County Fair in Honesdale, Pennsylvania.

Noah then took the microphone and apparently gave quite the interview.

“Because apparently, you’re spinning around and apparently every time you get dizzy,” Noah said, describing the ride. “And apparently (I) went down the super slide and I went down one and was scared half to death.”

Noah looked more like a newscaster who was giving color to the days events, but Noah apparently isn’t used to talking into the camera.

“I’ve never ever been on live television,” Noah told the reporter. “And apparently sometimes I don’t watch the news because I’m a kid.”

Noah does apparently have a favorite program to watch. “Apparently grandpa just gives me the remote and we just watch the Powerball,” Noah said