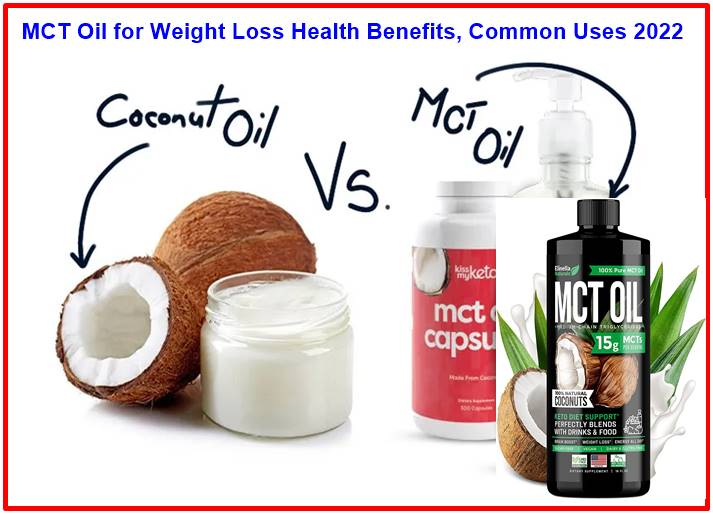 MCT oils are the latest fad in supplementation to lose weight, reduce appetite, or increase energy. Find out what medium-chain triglycerides are, what science says about their benefits and their possible risks.

There is a novelty in the world of supplementation for weight loss, it is MCT oil – short for medium-chain triglycerides, in English – a liquid that promises to help you lose weight, satisfy your appetite, or increase energy. Find out where this oil comes from and what science says about the benefits attributed to it.

MCT oil is made up, as the name suggests, of medium-length fat chains called triglycerides. These are saturated fats obtained from coconut oil, where more than 50% of its fat comes from MCT or palm, and whose chains can have a length of between 6 and 12 carbon molecules, the shorter this chain the better it is digested by the body, compared to the longer chain ones found in most foods.

Being a shorter chain, MCTs go from the intestine to the liver quickly, without waiting for the bile to break it down as it happens with longer chain fats. Once it reaches the liver, the organ breaks it down to use it as an immediate source of energy .

There are several types of MCT oils, such as C6 (hexanoic acid), C8 (octanoic acid), C10 (decanoic), and C12, known as lauric acid. The latter, C12, does not have unanimous acceptance, because according to experts, these elements can function as body fuel, and therefore it is unlikely that they end up being converted into fat.

Although they are little known, MCT oils are having an increasing role as supplementation, especially in athletes or bodybuilders. This oil is sold in cans and is often added to smoothies, coffee, or as salad dressing. These are the main benefits attributed to it:

According to a study from Columbia University (New York) published in the European Journal of Clinical Nutrition, MCT oils improve thermogenesis – the body’s heat production process that burns calories – and increases the production of two hormones that promote the sensation of satiety, peptide YY, and leptin. Also, triglyceride and glucose levels were lower when MCT oil was consumed compared to other foods. Other research found that this type of oil has about 10% fewer calories than long-chain oils, such as olive oil or avocados.

MCT oils have been shown to be able to convert to ketones, which are the breakdown product of fats when there is a low carbohydrate intake. This type of oil could be a good option for ketogenic diets, in which few carbohydrates and many fats are taken, as it would help to remain in a state that burns fat, which is known as ketosis, as stated in a study published in the Journal of Nutrition and Metabolism.

As we have said, being short-chain triglycerides, they travel faster from the intestine to the liver, without having to be broken down. This makes it possible for the liver to use it quickly as an immediate source of energy, as explained in a study in the Journal of Lipid Research. When converted to ketones, MCT oils can cross the blood-brain barrier, so it also serves as fuel for the brain.

Beneficial for athletes and sportsmen

When you exercise, lactate levels increase, a glucose metabolite that occurs when oxygen is poor, and taking MCT oil could help reduce the accumulated levels, causing you to consume more fat instead of carbohydrates. According to a study published in the Journal of Nutritional Science and Vitaminology, athletes who took 6 grams of MCT oil (1.5 teaspoons) before cycling had lower levels of lactate and performed better at exercise than those who took triglycerides from a long chain.

Control of epilepsy, Alzheimer’s, and autism

Research published in The Lancet has determined that MCT oil could help control conditions such as Alzheimer’s, epilepsy, or autism. An in vitro study published in Neuropharmacology found that this type of oil, specifically C10 or decanoic, improved seizures of epilepsy better than an antiepileptic drug.

Another work, from the Neurobiology of Aging, concluded that a single dose of MCT oil improved the short-term cognition of 20 people with Alzheimer’s disease. Finally, research from the University of Crete observed that following a ketogenic diet, with MCT oils, for six months promoted positive general improvements in autism. Of course, all of them are pilot studies with very few individuals, so they require larger studies to associate their use with these benefits.

Less risk of fungi and yeast

This type of MCT oils has antifungal and antimicrobial effects, as has been shown by several studies, such as one published in Nutrients, which states that this oil is beneficial for the intestinal microbiota, or another from the Journal of Medicinal Food, which determined that the oil of coconut, rich in MCT, reduced the growth of the bacterium Clostridium Difficile, which causes diarrhea.

Other research, conducted by University College Hospital (Nigeria) found that it could also inhibit the growth of Candida albicans by 25%, a yeast that causes canker sores and skin infections.

Ingesting these medium-chain oils for 29 days, along with phytosterols and flaxseed oil, helped reduce total cholesterol levels by up to 12.5%, according to a study by McGill University (Canada) , compared to 4.7 % that was reduced by olive oil. In the same study, it was observed that bad cholesterol (LDL) was also reduced when MCT was consumed in the diet.
Other Brazilian research determined that even ingesting it could increase levels of good cholesterol (HDL). All this goes to say that MCT oils protect the heart of people who take them, reducing the risk of cardiovascular disease.

There is still no consensus on the maximum amount that MCT oils should be taken per day, but a publication in the journal Nutrition Issues in Gastroenterology indicates that the highest dose that can be safely taken is 4 to 7 tablespoons (between 60 and 100 ml).

The specialists warn that before including any supplement in the diet it is recommended that you consult with the medical professional in advance, who based on the clinical history will be able to determine if it is suitable or not. And, for example, MCT oil should not be ingested by people who have an allergy to coconut, coconut oil, or palm oil, so the ingredients of the chosen product should be carefully looked at before consumption.

Although its use is considered safe for the rest of the people, some side effects have also been described that are important to know. Several studies, one published in the European Journal of Clinical Nutrition and another in the Clinical Nutrition ESPEN, determined that MCTs could promote the release of hunger hormones, such as neuropeptide and ghrelin, in some people, an effect totally contrary to what was expected. although they warn that they are very isolated cases.

There are also studies, such as that of the State University of Rio de Janeiro, which warn that MCT oil could cause a long-term accumulation of fat in the liver. This was observed in their study, which stated that in a diet where MCT accounted for 50% of fats, there was a higher prevalence of accumulating liver fat.

However, in this same study, it was also found that these types of oils could reduce total body fat and were able to improve insulin resistance. In spite of everything, one should not draw hasty conclusions since both this research, as well as many of those that are discussed, have been carried out with tests in mice, so there is still no conclusive scientific evidence.

How much MCT oil should I take to lose weight?

The most you should have in a day is around 4 to 7 tablespoons. Ideally, you should spread those tablespoons out throughout the day. You may not feel well if you eat large amounts of it.

Taking MCT oil adds extra fats and calories to a person’s diet. As such, excessive use of MCT oil may not be beneficial and could lead a person to gain weight. MCT oil supplements are created from versions of food oils, and so are not considered a natural product.

Which MCT oil is best for weight loss?

Here’s a closer look at what that means: C8 (caprylic acid): This is Brain Octane oil, and it’s the all-around best MCT for ketogenic energy. It produces more ketones than coconut oil, which means more ketone benefits like amplified energy, fat loss, and metabolic burn.

Is it OK to take MCT oil every day?

MCT, or Medium Chain Triglycerides, are the primary fats found in coconut oil and are some of the healthiest and most beneficial fats found in nature. The benefits of taking MCT oil every day are so plentiful, there’s no reason not to take it! It doesn’t even taste bad!

How Long Does it Take for Turmeric to Really Work 2022